Between 4:30 and 5:00 PM today Israeli snipers shot another ISM activist in the head. Tom Hundall from Manchester Britain is currently in critical condition in a helicopter on his way from Europa Hospital in Khan Younis to a hospital in Bir Sheva. He is 22 years old. According to Laura, the activists were being shot at while protecting some children from Israeli gunfire. Tom was in plain view of the sniper towers and was wearing a bright orange fluorescent jacket with reflective stripes. The nine ISM activists and many children were in the process of leaving the area. Sniper fire from the tower was hitting the wall close beside the children, who were afraid to move. Tom was attempting to bring them to safety when he was shot. There was no shooting or resistance coming from the Palestinian side at all.

While the US and British Governments drop tons of bombs on the Iraqi people, a group of approximately 300 Jewish and Palestinian citizens of Israel and tens of Internationals brought a semi-truck loaded with around 40 tons of flour to the Palestinian village of Karawat Bani Hasan, situated in the Tsalfit district of the central West Bank.

At about 5.20 pm on the 16th of March, Rachel Corrie from Olympia in Washington State, USA died of her injuries in A-Najar Hospital in Rafah after being deliberately run over by an Israeli military bulldozer. Rachel had been working as an ISM activist in Rafah for seven weeks when she was killed trying to prevent the demolition of Palestinian homes and property in the Hi Salaam area of Rafah. The confrontation between the ISM and the Israeli Army had been under way for two hours when Rachel was run over. Rachel and the other activists had clearly identified themselves as unarmed international peace activists throughout the confrontation.


A few days ago it snowed in Jerusalem. On Tuesday, Ferbruary 25th, the cold wave featured in all Israeli papers as the main news. Even in my heated home in Tel Aviv it was cold. My thoughts wandered to my Palestinian friends - colleagues from Bir Zeit University. How does the snow fare with a family that still has a home, but not that much money to heat it? And what's with those who no longer have a home? It snowed in Jenin as well. How did the Jenin refugees survive the cold, and those who were recently made to flee from Hebron? And what about the old people, for whom the cold is particularly dangerous? Where did the new homeless of Gaza spend the night - those whose homes were destroyed that same day? Is UNRWA still able to provide them with blankets and tents? At the beginning of February, the United Nations Relief and Works Agency for Palestinians in the Near East (UNRWA), renewed its emergency appeal to the international community for urgent contributions for the first half of 2003. They stated that without these contributions, which have decreased lately, their budget would end in March

World attention is focused nowadays on Iraq and the effect of the US-led attack on regional stability. Millions of people all over the world demonstrate their opposition to the war and attempt to avert it. However, the message we, the Palestinian civilian population, are receiving from Israeli officials is threatening us with dangerous consequences. Statements made over the last two months by both Israeli officials and media indicate what they are proposing, planning and preparing to execute in the Palestinian occupied territories in case of war against Iraq. Such statements could be meant as intimidation, deterrent or real threat. In view of our past and present experience, we, the Palestinians, tend to see them as a threat endangering our very existence in this land of ours.

I can't remember exactly when I decided I wasn't prepared to take an active role in the army. I remember I started talking about it, I decided to open up questions that I was afraid to ask, hard questions that the society I lived in always took for granted, as pre-determined. Pretty spontaneously I announced to my friends that I didn't intend to enlist in the IDF. The problem was that, even for myself, I couldn't explain exactly why. I knew about the occupation and I knew about the oppression but it was so far away. I guess I was wrong and it was actually so close by. My best friend couldn't take my decision. She told me she didn't respect me, that we have no choice, that we have to fight...

To read the whole article, click here.
For more on the right to refuse to perform military service (conscientious objection), click here.

Without even watching the news (our satellite dishes were buried in the snow 48 hours ago) we can imagine that newspapers and TV stations around the world are running pictures of a snowy Jerusalem and Ramallah. Pastoral pictures of a snow covered Dome of the Rock and Wailing Wall, or perhaps a snow covered Israeli tank in Hebron, or Palestinian children throwing snowballs at Israeli soldiers...The snow will soon melt and the destroyed homes, bullet riddled walls, tank-rippled roads will re-appear, only to jog the collective memories of those Palestinians that remain the victims of this thirty-six year man-made tragedy called Israeli Occupation.

To fight the anti-intellectual atmosphere within Israel, local academics need as much support as they can get from their colleagues abroad. A boycott will only weaken the elements within Israeli society that are struggling against the assault on the universities, and in this way will inadvertently help those who want to gain control over one of the last havens of free speech in the country.

The IDF top brass has recently decided to judge refuseniks by the military courts system - a criminal court for soldiers. Thus, we face the danger that the prisoners of conscience will be sentenced to up to three years in military jail for their devotion to the cause of peace and their refusal to take part in the occupation apparatus, an apparatus already hovering on the edge of the commission of a major war crime. It is obvious that this step is designed to break the will of Ben Artzi, the first to be judged, and the other refusenicks. 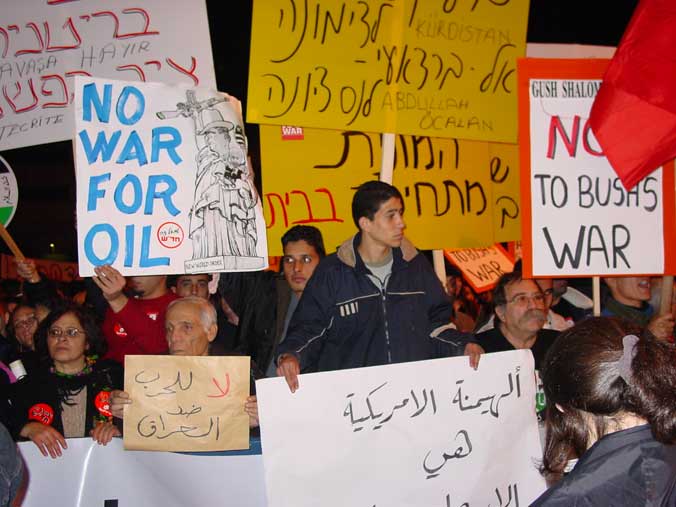 Between two and three thousand Palestinian and Jewish demonstrators marched from the Cinemateque to the Museum Square in Tel-Aviv, against the U.S. led push for a war against the Iraqi people.

Following my last military reserve duty, I was kicked out of my unit, the Israeli Defense Force's (IDF) educational corps. There was a surrealistic dimension to the whole experience. I had driven a few hours to a base located near the Egyptian border after having been asked to lecture about "Leadership" to 60 soldiers of the Givati infantry brigade who were about to begin officers' training course. These young men are the military's future commanders, its elite. I decided to concentrate, in the lecture's first part, on the relationship between leadership and moral virtue, examining the characteristics distinguishing leaders such as Hitler, Stalin, and Pol Pot from others like Nelson Mandela, Mahatma Gandhi, and Martin Luther King. In the discussion that followed, the soldiers concluded that all of the leaders mentioned possessed charisma, intelligence, and rhetorical skills, but only the latter three were guided by universal moral values -- the equality of all people. 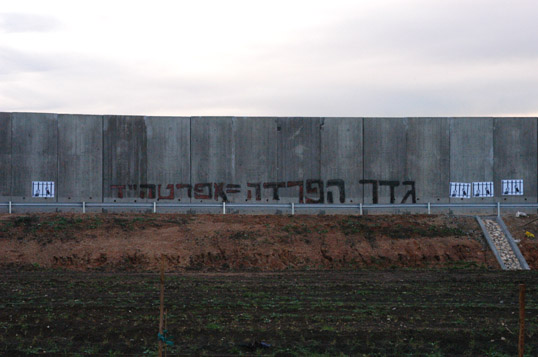 The Apartheid wall will not fulfill its proclaimed destiny - That it will provide security for the citizens of Israel. The separation policies, land theft, home demolitions and hardening Palestinians' life is only increasing terror and is actively preventing any hope for peaceful joint life between Palestinians and Israelis. The only way to establish security for Israelis is through a just solution to the conflict, promising equality to every man and woman. There are not walls high enough or trenches deep enough to prevent the oppressed from demanding equality...

It is difficult to comprehend the bloody era in which we now find ourselves. What began at the 1991 Madrid conference as an attempt at parity and historical compromise, establishing international law and United Nations resolution 242 as the peace process terms of reference, was implemented in such a way as to destroy the very concept of "land for peace." Only the need to provide security to Israeli citizens was considered, while the need to guarantee security to the Palestinian people has been ignored. This, we believe, is one of the gravest problems plaguing the peace process and one that continues today.

In April 2002, following the Israel's "operation" in Jenin, first calls for institutional academic boycott of Israeli universities appeared in England and in France.In the university Paris VI the board meeting on Monday January 27, 2003, reconfirmed the resolution with an overwhelming majority. A similar resolution was subsequently approved by two other French universities in Grenoble and in Montpellier. Below is my expression of support, to appear (in French) in Le Monde.


To read other articles by Tanya Reinhart, click here.

One of the characteristics of much academic writing is an obsession with theory at the expense of empirical investigation. It is rare to find a book that combines genuinely novel theoretical exploration with rigorous empirical study, the more so in fields such as political science where abstraction seems to have become the norm. It is for this reason that The Global Political Economy of Israel is such a gripping read. A remarkable investigation into the concrete workings of the Israeli and U.S. economies that avoids the fatuous generalities of much of the globalization literature, it presents a challenging theoretical framework that not only clarifies the past but also seeks to understand the present. Nitzan and Bichler start by challenging the traditional view of Israel as a "unique case" characterized by a strong state guided by socialist ideology. Their argument instead looks beyond the apparent form and seeks to identify the essence, using as their guiding principles the concepts of capital accumulation, ruling class formation, and Israel's place in the global political economy. In so doing, they attack key premises of neoclassical economics; assumptions such as an economy in equilibrium, full employment, and obsession with so-called neutral aggregates such as GDP and inflation rates. Instead they ask the questions: Who are the winners and losers in the economy and how is power exercised? 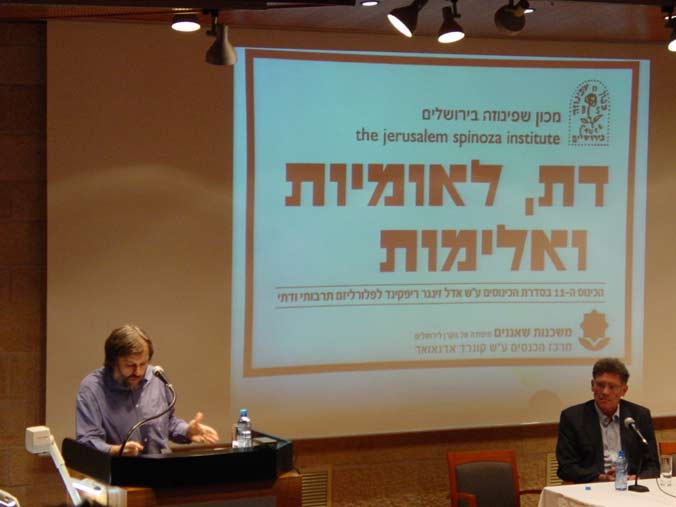 Slovenian philosopher and psychoanalyst Slavoj Zizek spoke on January 12, 2003 at the Jerusalem Spinoza Institute for a conference on 'Religion, Nationalism and Violence' on the subject: "Why September 12th is More Important than September 11th." The lecture is 72 minutes (32 kbps MP3 (16.60 MB)), the first two minutes are a Hebrew introduction, but the lecture is in English. The lecture was recorded by Indymedia Israel with the permission of Slavoj Zizek and the Jerusalem Spinoza Institute.


For more analysis and viewpoints, go to the IMC-Israel Frontpage archive